La Camioneta: The Journey of One American School Bus
by Stephen Holden 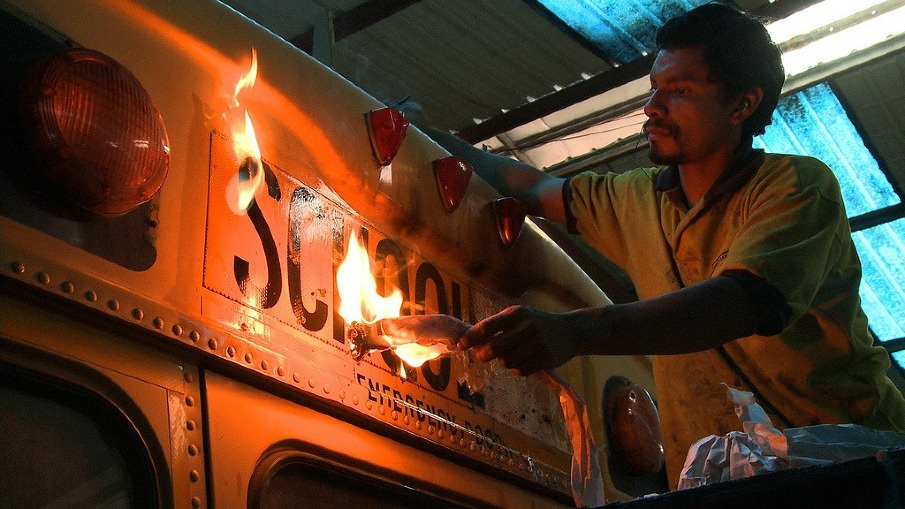 Mark Kendall’s quietly moving documentary, “La Camioneta: The Journey of One American School Bus,” is as modest and farsighted as its cast of Guatemalans who make a living resurrecting discarded American school buses. The movie begins in rural Pennsylvania, where yellow buses — decommissioned after 8 to 12 years of use but still in good condition — are auctioned to bidders, many from Central America.

Domingo Lastor, who purchases a Spotsylvania County, Va., school bus, intends to resell it in Guatemala. There it will be refurbished, painted red and blue, brightly decorated with stars and images of birds, and used for public transport. The long trip to Guatemala via Mexico is exhausting and hazardous because of the risks of armed robbery once the vehicle crosses the border into Mexico. In Guatemala the bus is sold to a dealer, renovated and given to a designer who thinks of the buses as “migrants” in a two-way exchange, since many residents of his small rural town have moved to the United States.

The lovingly restored vehicles are known as camionetas. An American nickname is “chicken bus,” because many passengers carry live poultry on board.

This particular bus lands in Quetzal City, which has endured an epidemic of violence in which armed gangs extort payment from the drivers to keep their passengers safe. In 2006, the film says, nearly 1,000 drivers and fare collectors were killed in Guatemala.

But “La Camioneta” is not a graphic exposé of the horrors born of desperate poverty. It is an upbeat story of resilience, regeneration and artistic imagination. For all the perils they face, the Guatemalan drivers, dealers and mechanics are able to make a living from American refuse and in the process turn the buses into mobile works of folk art.

A philosophical voice-over by Luis Aguilar, a frequent passenger, lends the film a cosmic perspective. “When you die, your body dies, but your being doesn’t die,” he says. “Your being, your energy lives on inside of everyone. It’s the same for a bus, isn’t it? For me, life is a journey. Everything carries you along.”