The Driver’s Seat
by Ela Bittencourt

On Mark Kendall’s documentary La Camioneta, doing business with Mexico’s drug cartels, and what old school buses have to do with self-determination. 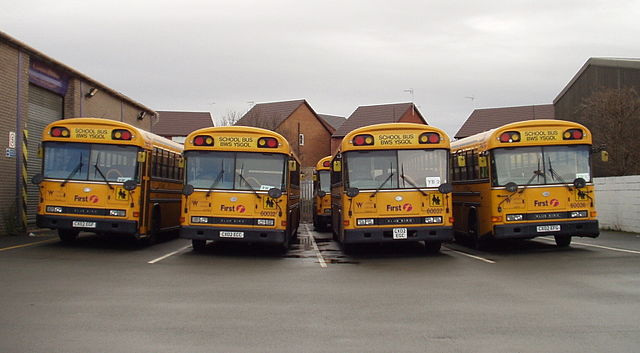 La Camioneta, the kindly spirited documentary by Mark Kendall, traces the stories of old American school buses that are sold at an auction and taken across the border to Mexico and to Guatemala, where they are remodeled to serve as local transportation. In Kendall’s hands, this businesslike storyline becomes a metaphysical fable for the globalized world. Domingo Castor, the first protagonist we meet, is responsible for driving the buses safely to Guatemala. He is grilled by the Mexican border police, in a scene that immediately suggests the disparities of the crossing, with Mexico as a perilous purgatory where drivers are often assaulted and robbed. But Domingo’s motto, “don’t look back and keep going,” is an optimistic one, if anything because he realizes what a prized possession an old bus can be. Along the chain of bus restoration, we meet the Guatemalan bus importers, the mechanics, and eventually the bus drivers themselves. One of them, Ermelindo, realizes his lifetime dream of owning a bus, as he takes it along the route from Mexico City to Quetzal. Another, Angel, speaks tenderly of his “relationship” with a bus. It’s one of the disarming charms of the film: We observe how tenuous—if persistent—dreams can be. “I could never imagine I would go to Quetzal,” says Ermelindo, echoing Domingo’s motto to always move ahead. The talk, however, often turns to darker subjects, such as the extortionists who threaten and kill bus drivers, and the worries about being able to pay off the loans that secured the bus purchase.

To highlight the tension between the promise that a bus holds, and the dangers of being a Guatemalan bus driver, Kendall intersperses the narrative vignettes of daily life and crime with shots of buses being remodeled. We see car shop workers deliberating on each and every detail, so much that a modest bus grows in significance. Kendall eschews static shots, cutting in a few interviews, but mostly following the drivers from the sidelines, often from the driver’s seat. The story emerges organically as we take in the episodes: Ermelindo at the car shop as he awaits his bus being fixed; the interior of Ermelindo and Angelo’s houses; their families at meals. Emanating from these stories is the idea of interconnectedness; the discarded buses go through a reincarnation, as the yellow paint is scraped down, mechanical defects fixed, and the colors of private bus companies meticulously applied, for a “brand-new” look.

But the real second life is the one these buses bring to their new Guatemalan owners, who hope to earn more and to improve their lives. Their stories, in turns hopeful and skeptical, are complicated by how hard it is to earn a living that ultimately depends on bribing the cartels.

This theme—independence mixed with the crutch of being in someone else’s pocket—is a familiar one in Central American countries known for corruption, but Kendall makes his documentary memorable by resisting the urge to give crime center stage. Instead he focuses on the lives being quietly and doggedly built, even if at a great risk. In one evocative scene, a crowd gathers at night at a scene of a bus burning, as police clear the area. The television footage, played against the static of police cars, announces the attack on the Quetzal line by a remotely controlled grenade. The mood is quiet, an aftermath, but a poignant reminder of the reality which these men face, in their inconspicuous daily bravery. In another scene, in daylight, a driver’s bloodied body is carried out of the bus by the police, as the throng silently looks on.

Survival and work have a nuanced, bitter interplay: Work guarantees survival for the drivers’ families, even as it may end a driver’s life. The intensity of fear and worry are particularly felt when one young driver shares the despair he feels each working day. Survival against the odds, where no logic exists and no fate is certain, highlights the strength of Guatemala’s people, but also its persisting woes. The fable-esque touch comes from the voiceover, which links the individual stories to the metaphor of life as a perilous journey. In this case, the men have decided to seize the opportunity to be in the proverbial driver’s seat, literally. As Luis, a frequent passenger comments, “life is really what you want it to be.” The message would sound pat, had it not been supported by bracing fortitude.