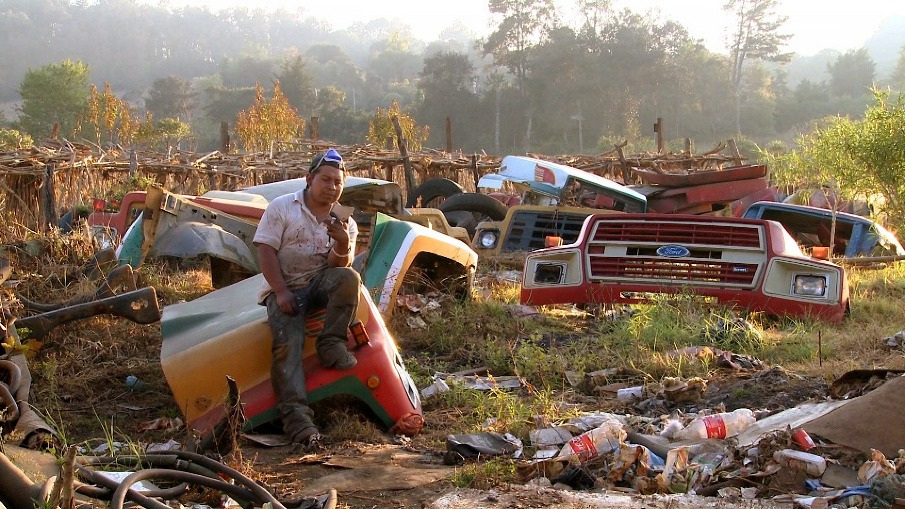 In a memorable scene from Robert Altman’s 1975 classic “Nashville,” a ditzy British reporter played by Geraldine Chaplin wanders beside a fleet of yellow school buses, scavenging for glib metaphors about the fissures in U.S. society.

In Mark Kendall’s first feature film, the documentary “La Camioneta,” the metaphors about buses are considerably more nuanced and surprising. They’re also much more understated, never spoken aloud either by a narrator or by the movie’s mainly poor, rural Guatemalan subjects, who scratch out a living by selling, artfully remodeling and driving discarded U.S. school buses.

“In approaching this project I wanted to try to reveal the layers of complexity while simultaneously preserving the mystery,” Kendall said last week, speaking by phone from his Brooklyn apartment.

This palpable sense of intrigue comes from the movie’s fusion of mundane reality with a magic-realist story of transformation that might’ve been lifted from a Gabriel García Márquez novel.

Named for the Spanish word for truck, “La Camioneta” follows the strange but true odyssey of a yellow school bus once used for transporting rural Pennsylvania pupils.

In the movie’s opening minutes, we watch the bus — barely a decade old, and still in apparently good condition — being auctioned off in Texas. Following an arduous and dangerous journey across Mexico, it winds up in Quetzal City, Guatemala, where it is sold to a dealer. It is then commissioned to a local designer who lovingly outfits such vehicles with bright colors and elaborate folkloric images of birds, stars and other indigenous Maya motifs.

Ultimately, the bus, now turned into a sort of four-wheeled art installation, is destined to shuttle Guatemalan workers across a region plagued by violent gang extortionists who menace passengers and drivers alike.

Critic Stephen Holden of the New York Times praised the film, which is playing this week at the Downtown Independent theater, as “quietly moving,” “modest and farsighted.”

It would be easy, in the manner of Chaplin’s character in “Nashville,” to belabor certain obvious symbolic themes in “La Camioneta”: how First World castoffs become developing-world treasure; the contrast between North American prosperity and wastefulness and Central American resilience and resourcefulness.

But Kendall, working with Guatemalan co-producer Rafael González, decided to jettison all such metaphorical baggage. The film also eschews any journalistic recitation of hard facts about the country’s poverty rate or crime-rate statistics.

Instead of supplying the movie with prefabricated significance, Kendall said, he wanted to allow his viewers to draw those interpretive links for themselves, and allow “the context and sort of the socioeconomic and sociopolitical conditions” of the tale to “seep into its very essence.”

“I am generally drawn toward stories about process,” said Kendall, whose previous short film, “The Time Machine,” profiled a Honduran-immigrant watchmaker who labors amid clock-obsessed commuters rushing through New York’s Grand Central Terminal.

That earlier movie, Kendall said, “was in part about the relationship between his craft and the landscape in which he does his craft” — a description that also could apply to the cheerful, hardworking bus restorers of “La Camioneta.”

“There were also certain existential questions that I thought the subject perhaps offered itself to, although I didn’t know how that was going to take shape,” the director said.

Kendall began honing his interest in, and knowledge of, Guatemala while pursuing a two-year master’s program in Latin American studies, focusing on the Quichean language and culture of indigenous Central Americans.

Although he never planned for his low-budget film to have a theatrical release, it was shown in New York before landing at the Downtown Independent. In coming months “La Camioneta” will have additional screenings on the art-house circuit, at museums, performing arts centers and other venues. And Kendall plans to make the DVD version of the movie widely available in Guatemala, where many people can’t afford to attend theaters or even buy full-priced DVDs, by leaking the film to video pirates.

“We’re going to go straight to the black market, get it out on the streets, make it as accessible to people as possible,” he said.

One of their first stops, he added, will be a well-known Guatemala City street vendor who specializes in offering ultra-cheap, customized DVD versions of pirated indie films (you can pay extra to get the “special features” or the original casing.

Like the bus painters of “La Camioneta,” the vendor is engaged in a commercial transaction that offers good value for minimal cash. “And being really efficient and effective with the available resources,” Kendall said, “and developing your trade based on the relationships and the reputation that you generate through your work.”